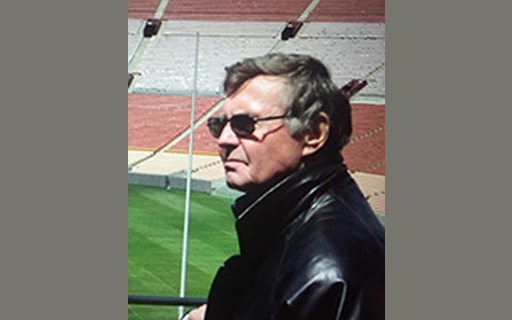 November 22, 1963
I had been in the big new office a few months but I know the truth — even though I’m a Vice President of Four Star, a major Hollywood studio, I’m still a kid in a grown-ups’ job.

Bob Gray runs Special Effects and we hunt and scuba dive together. I’m surprised to see him in my office. He’s comfortable on the back-lot, not in the executive building. As well as I know him, I can’t read the expression on his face — sort of hurt and puzzled at the same time, like a man having a heart attack but in denial. He tells me Kennedy has been shot. My first thought is that it can’t be too bad, he’s the President. The doctors will fix him.

The scene on television is chaotic and I feel like I’m watching from underwater. Kennedy is in surgery and again I think the doctors will save him. But an obscure and unconfirmed report chills me. An unnamed FBI agent had seen the President carried into the hospital and said that his injury was fatal. Before it’s announced to the country, I know in my heart he is gone.

I become aware of the sound of a woman sobbing in the hallway. Callow fellow that I may have been, at that moment I realized how profound the change would be.

The next several days are surreal. There is an emotional umbilical between me and the television set. As I watch, I drink, but I can’t get drunk. Viewing the funeral, the production manager part of my brain marvels that an event of that scope and pageantry can be organized and come off flawlessly in those few days.

Although I had never met Kennedy, I begin to feel a personal sense of loss as I remember conversations with people who knew him well. I feel he represents the very best of we Americans and that ours is a colder and poorer country with his loss.

But I am young and strong and emotionally tough and no stranger to death close at hand. I do not cry.

December 10, 2000
I’m in D.C. and decide to walk. I walk all the monuments: Washington, Vietnam, Lincoln, Korea and FDR. I head across the bridge to Arlington and am drawn to the tomb of the unknown soldier. I watch the changing of the guard. The resolute faces of the young sentries seem to say “sleep well, we’re here, we’ll watch you”.

I follow the winding path through the forest of marble and granite. The flame is before me, marking the surprisingly simple resting-place of John F. Kennedy. Suddenly, unexpectedly, a wave of emotion rolls over me. I feel a profound sense of grief.

Gone is a President, a man of elegance and grace and unrealized promise…

And gone is the youth who witnessed that long-ago tragedy but was then too strong to cry.

Standing before JFK’s grave, after thirty-seven years, finally I weep.

In Norman Powell’s career as producer, director, writer and network executive, he has been responsible for thousands of hours of television and feature films. Powell has served two terms as Chair of The Caucus, received the Caucus’ Lifetime Achievement Award and has been Co-Editor of The Caucus Journal for the past six years.