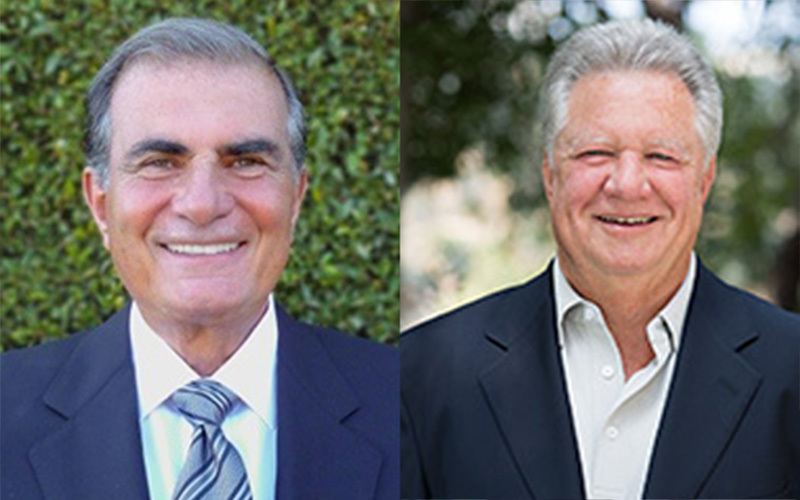 by Bob Papazian and James Hirsch

1997 was the year that would change everything. The landscape for independent companies like Papazian-Hirsch had changed dramatically, with the elimination of the “Fin-Syn Rules”. Out of a dramatic necessity, and after numerous discussions regarding the survival of P/H in this new landscape, the partners decided, “Hey, how about a studio facility?” Papazian and Hirsch had shifted their focus, having put all their chips on the table to acquire a 12-acre site in the San Fernando Valley. The property included a 189,000 square foot structure, which became five sound stages and production/executive offices. It would become the first new film and tv studio in the Hollywood area in decades and was known as Ray-Art Studios.

How that purchase played out and the subsequent building, naming and operation of Ray-Art Studios became the catalyst to a whole new beginning for the partnership. Even as they were Co-Exec Producing the series Nash Bridges for CBS, they put everything they had on the line and never looked back. Now two decades later, they reflect on the events and decisions that changed their lives forever.

Bob: You remember the early days of producing in San Francisco? We were living in a hotel, looking for apartments to rent and figuring out how Nash Bridges production issues and overages could be wrangled. And at the same time we were in the midst of buying the studio. It was craziness.

Jim: Our assistant, Jenna, would protect us by keeping track of us while we were racing back and forth between LA and San Fran, trying to get the financing for the purchase and keeping hold of the reins of Nash…

Bob: And dealing with Don Johnson, who was ready to test us in every way possible. Remember the morning we had a phone call with New York during the financing efforts? We met in my hotel room at 6AM, me in pajamas and you in sweats. We were making the calls when the waiter brought in breakfast. He took one look at us and shrugged. Two men apparently sharing a bedroom in San Francisco didn’t raise an eyebrow.

Jim: We howled laughing over that one. How about when we stood on the balcony overlooking San Francisco at that moment, wondering how all this was going to work out. I looked at you and quoted from Butch Cassidy and The Sundance Kid, when Sundance refused to jump from a cliff into the river, saying he couldn’t swim. Butch laughed at him and said: “What the hell, the fall’s going to kill us anyway.”

The details of the financing efforts that came together at the last possible moment is a story for another time. The boys were continuing to put Nash Bridges on a reasonable production budget and schedule and working with Carlton Cuse, John Wirth and Don Johnson to also increase the creative quality and bring up the ratings…while at the same time closing the deal on the new property and finding the necessary financing and figuring out how they were going to run the place. It was a time of unbelievable scrambling in terms of time, division of labor, planning for the future and creating an entirely new business while at the same time successfully running a hit series.

Jim: I can still remember the phone calls I got from you while I was up there producing the series and you were down in LA trying to figure out how the studio would operate.

Bob: Sometimes I’d do it just to make you nuts. When I knew Don was acting up or the show was struggling, I’d call and ask, in the most innocent voice: “Jim, how much do you think we should charge for a chicken salad sandwich in Joey’s Grill, our new commissary at the studio?”

Jim: Or, knowing that I’m color blind, you’d ask what color I thought the walls in one of the offices should be. It was always funny, but there was an underlying message. You were creating what the studio would be and including me. These joke calls were actually a subtle way for me to know what was going on down at Ray-Art while I was producing in San Francisco.

Bob: And you were up there because we needed that income. We didn’t have the studio up and running yet and there was so much to do, but we needed the show to give us a cash flow until Ray-Art was on its feet.

Jim: And speaking of that, I remember when we came up with the name. You suggested we name the studio after our fathers; Arthur Papazian and Ralph Hirsch. Ray-Art was the best way to combine those names. It was great for both of us to be able to honor the men who’d raised us and given us the values that were being put to the test now.

Bob: There are a million stories about the little details that we both dealt with during that first year. That’s for another time, and maybe, finally, our book.

The studio became an immense success, hosting tv series and feature films and over the next few years, Ray-Art grew, as Bob built a brand-new audience rated stage. The Dr. Laura Schlesinger Show went in and Papazian-Hirsch began plans to expand the studio’s footprint with three more new stages. Then, the proverbial offer they couldn’t refuse came in. Ray-Art had a chance to become a new brass ring moment, a way of adding something totally different and exceptional to the triumphs they’d already had. It took months to say yes and move to a new adventure. Their decision to buy the property became the catalyst to a whole new existence. As the business of television was about to change forever, so was the business structure of one of Hollywood’s leading production companies. Papazian-Hirsch would never be the same.

Jim: I remember being in San Jose with my son for the NCAA tournament. We were in a hotel room waiting for the next game when I got on a call to listen to the offers being made to you in our board room. I fell off the bed and called you back afterward and asked one question: Did I just hear what I thought I heard?

Bob: Yep. I confirmed the number and we were suddenly in a new and unfamiliar place. Though we kept the studio running for one more year, this was both the end of Ray-Art and the beginning of a whole new journey…into the land of real estate.

Jim: I’ve often told people that I give us significant credit for seeing the handwriting on the wall in our independent producing business and switching directions when it became necessary, but the choice of the twelve acres we bought was a bit of dumb luck. We had no real idea of what that land was worth, and how that would ultimately change our lives.

Bob: We may have been novices in the real estate business, but we had to learn fast to protect our assets. And the facility business was still there in our lives as we looked to get involved in other studios.

Jim: Right. But I will say this for all the world to hear. Your skills as a producer gave you the ability to learn a new business as if it were producing a new show. Eventually you put those same skills to work learning the facility business, which set up your time as CEO of legendary Sunset Gower and then to the real estate business, and today I’d put you up against anyone in that field, even though, at the beginning, we were complete novices.

Bob: It’s strange isn’t it. We had no choice but to learn another field and it turns out to be a field we had often talked about getting into but never actually taking the plunge. Now, we were fully immersed and to survive, we had to learn all there was about it.

Jim: There’s a strange irony to all of this. Think about what the television business has become. The explosion of outlets and streaming services and the countless shows that populate them. Producers and writers are certainly abundant in that world, but would there be a place for the kind of partnership we chose to have?

Bob: Probably not. You might have gone on as a writer, me as a producer, but the combination of our skills and the independence we lived by would have disappeared in today’s climate. Instead, our partnership continues to flourish.

Jim: I would say this: Partnerships come in all sizes, shapes and attitudes. Some are business only, some are family born, some are contentious and difficult. We have something that others strive for…a partnership that is also a strong bond of friendship.

Bob: Absolutely. It’s built of trust in each other and respect for each man’s abilities and strengths. Our families are close and we rarely disagree on things. We enjoy the process and have fun even when things are tough.

Jim: Couldn’t agree more. What we’ve been able to do is enjoy our years together, have different types of success and accomplishment and always have a new horizon to work toward in the future. Here’s a toast to you, partner. Thirty more.

Partnership is not an easy thing to describe. Following a definition in a dictionary hardly comes close to explaining what a successful partnership is all about. Papazian-Hirsch stands as a beacon of what can be considered a successful partnership. We hope these articles have enlightened the reader to how we came to be. We wish we could tell all of the millions of stories that populate our thirty years as partners. Perhaps these articles will be chapters in the book our patient wives, Sandy and Judy, have always been bugging us to write.

Robert Papazian and James Hirsch have been partners for 30 years and continue to look forward to new adventures together.