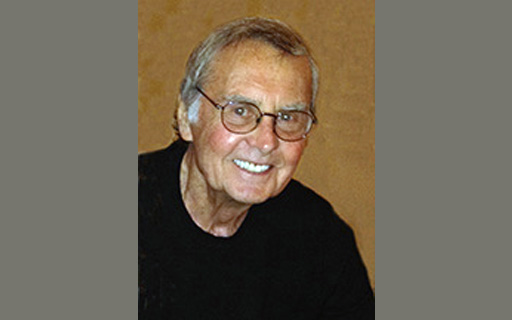 The following article describes Norman Lear’s campaign from 2004 – 2008 to empower and encourage every eligible 18-29-year-old in America to register and vote. The article was originally published in The Journal in 2008 but Lear’s call to action remains relevant today.

In 2000, Norman Lear purchased a rare original copy of the Declaration of Independence. His goal was to bring America’s birth certificate directly to the American people. The Declaration of Independence Road Trip was launched on July 3 and July 4, 2001 in Washington D.C., and at Philadelphia’s celebration of the document’s 225th Anniversary. It has made its way to communities, cities and college campuses across the United States including appearances at the 2002 Winter Olympic Games and the 2002 Super Bowl in Atlanta.

Out of the hugely successful Declaration of Independence Tour, Declare Yourself was conceived and born. Declare Yourself challenges young Americans to find their own reasons to participate in civic affairs and to register and vote. 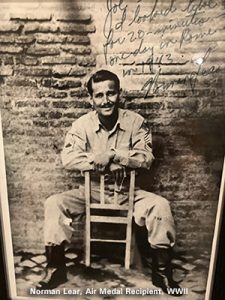 Declare Yourself. That’s exactly what Norman Lear and so many of his generation did in 1942. They stepped forward, declared themselves, strapped on a uniform, went across the sea and saved the world.

Norman Lear flew fifty-two combat missions in a B-17 strategic bomber in Europe. I have recently flown in a B-17 and I imagine flying one during World War II must have been roughly equivalent to sitting in a Quonset hut at the North Pole with all the windows open and the wind blowing 250 mph. The North Pole experience wouldn’t include the additional challenge of having no useful oxygen except what you could suck out of a canister. And, of course, the fact that enemy fighters and flak were about to show up and try to kill you.

I met Norman Lear in the mid-1970’s. During that period, I worked briefly for CBS in the Current Programs department. Current Programs was, with the exception of Program Practices, the worst job at the network. Among other series, I was assigned “Rhoda” at M.T.M. and “One Day at a Time” and “The Jeffersons” at Norman Lear’s company, Tandem/T.A.T. My job title was Executive Producer for CBS. What a joke! The job description called for liaison with the independent production companies, writing on-going status reports for each program, and providing “helpful suggestions” to the show runners. I figured out early on that any helpful suggestions had better be extremely helpful when talking to the likes of Jim Brooks or Norman Lear. Unlike today, network input was not overvalued and the network/independent producer relationship was nicely balanced. It’s a pity what’s happened since then. But I digress.

In an understated way, Norman Lear was clearly the master and commander of any environment. At the table reading, on the stage during rehearsal, or in the control booth on show night, it was clear that Norman had the admiration and respect of all who worked for him. He, along with a handful of other creative entrepreneurs enriched a vibrant growth industry with world-class television programs. To this day, he continues to use his great power to communicate to reach out to young Americans.

It may well be that Norman Lear’s greatest contribution to American culture will come later in his life with his drive to engage a new generation of Americans with their country and the path that their country takes going forward. My own anecdotal evidence based on conversations with my highly educated twenty-one-year-old son and his peer group indicated that many young Americans hold civic engagement and, indeed, the whole political process, with the same disdain that they have for acne.

But all that seems to be changing and I suspect Norman Lear’s campaign has had something to do with it. It is estimated that the Declaration of Independence Tour and original Declare Yourself campaign had registered more than one million new voters in the 2004 and 2006 elections.

The goal of the current campaign is again to engage all Americans in civic life, especially the four million additional young people who become eligible to vote in 2008.

Declare Yourself is a national, non-partisan non-profit effort to empower and encourage every eligible American to study the issues and to register and vote. Using the power of strategic media partnerships and internet and mobile technology, the campaign will blanket the popular culture as well as high schools and universities with the hope of making voting as much a rite of passage for young adults as getting a driver’s license or buying alcohol legally.

I have known many American combat veterans from World War II, Korea, Vietnam, Iraq and Afghanistan. It is my opinion that their extraordinary sacrifice and level of service beyond their own self-interest gives many of them special insights. They understand that the freedom we Americans enjoy is priceless. It is worth dying for.

Jack Jacobs, a Medal of Honor recipient for action in Vietnam, who I interviewed for a documentary, said:

“There is a common thread that goes all the way back to 1776 and we’ve still got the thread in our hand. We can follow it back if we want. And the fact we actually hold that cultural and political thread is very, very important. It’s important we don’t let it go.”

Norman Lear, who received the Air Medal with four Oak Leaf Clusters for his service to our country in World War II, certainly understands this. His Declaration of Independence Road Trip and his Declare Yourself campaign are powerful reminders that we must never let that thread go.

“We hold these truths to be self-evident, that all men are created equal, that they are endowed by their Creator with certain unalienable rights, that among these are Life, Liberty and the pursuit of Happiness.”

In 2018, Emerson College honored Norman with a sculpture on Boylston Place and a scholarship in his name. The City of Boston proclaimed October 4th Norman Lear Day.

On May 22, 2019, Norman’s All In The Family and The Jefferson’s were performed live in front of a studio audience and telecast on ABC. The one-time only special featured contemporary actors portraying Norman’s iconic characters. Time marches on — so does Norman Lear.