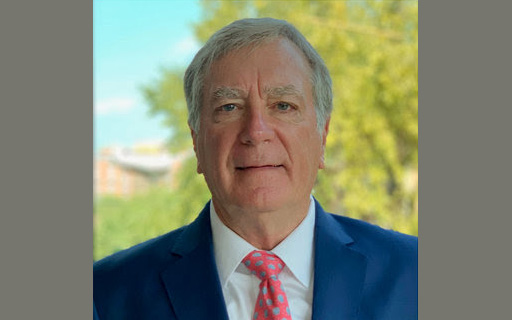 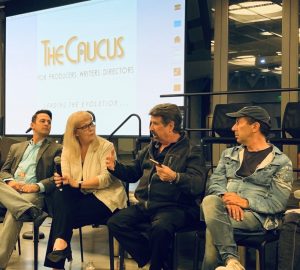 Producer Larry Kasanoff used this anecdote to explain the current state of Virtual Reality in today’s entertainment industry during a panel discussion sponsored by The Caucus at Emerson College in Hollywood on April 4th. It’s a great technology, but how will it be used?

Michael is the co-creator of the television series Baywatch, which ran for eleven seasons (1989-2001) and today, re-mastered in HD on Amazon Prime, is one of the most widely watched television shows in the world. While that might be enough of an accomplishment to define a career, Michael saw an opportunity to share his Baywatch world with a new audience in an entirely different way. Thus began his partnership with Travis Cloyd and Larry Kasanoff to create the Baywatch VR Location Based Experience.

“We are in the wild west of the virtual technology world,” Travis Cloyd suggested, “There are no rules and few limitations.” The virtual environments that are being created today are being experienced through cumbersome goggles and headsets that are often connected to gaming devices (mobile technology) or in Location Based Environments (LBEs), where participants interact with the technology in theme park rides or specially designed rooms within shopping malls, or even large outdoor spaces. However, future applications are being developed in the fields of education and even medical technology; and new distribution platforms are being introduced constantly. Innovator Julian McCrea has even created a Virtual Film School that teaches 2D film making using VR technology, and partnered with Cedars Sinai Hospital to develop a VR microscope to study tumors. 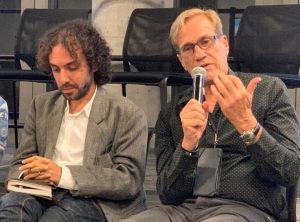 While Randal Kleiser spoke with excitement about his soon to be released Virtual Reality series Defrost, he and the other panelists, whose roots are in traditional filmmaking, emphasized their belief that good character and good story remain the essential elements of all successful creative endeavors, and virtual projects are no different. Technology is not a substitute for good storytelling. The artist must be able to answer the question – how will VR technology help me tell my story more effectively?

There is no doubt that VR, (Virtual Reality), AR (Augmented Reality), XR (Extended Reality) and Mixed Reality are terms that will become more familiar to all of us in the near future as more content is created, but if you wonder how this technology can be monetized consider this – Super Data Research Analytics predicts that by 2020, the Virtual Reality market will be generate $14.5 billion in sales annually. That’s a lot of Velcro.